↓
Home→Media Commentary→Talking Carla: ‘You could not ask
for a better example
of a corporate police state.’

This is an interview of Topper Sherwood by Gordon Simmons, for a show on West Virginia Authors for the state Library Commission. The conversation was taped in Charleston, West Virginia, in March 2016. (Below the screen are some highlights.)

“I wanted to look at the battle (of Blair Mountain) from different points of view…involving the governor (and) the US military. …I break out differences within the (labor) union that, to me, were significant.” (The militants vs. the negotiators.)

“Talking to the children of the survivors (of the battles) was real interesting. To hear them talk about their fathers’ remorse, for example, which I built into the book. People on both sides….told me the same thing — that, at the end of their lives, they were in tears over the killings they had done.”

“The fact that Don Chafin, the sheriff of Logan County, was paying these (private policemen) a salary (from) his coal company income, while also paying them a deputy’s salary! I mean, think of what that means: This is a private police force, being paid by the sheriff — given badges by the sheriff — and yet to carry out company policy, which also ‘happened’ to be county law…. You could not ask for a better example of a corporate police state than Logan County between those years.”

“The worst part of the battle, from my reading, was when two forces met each other, greeted each other, and sat down together before they realized they were on opposite sides. And then the shooting began…. I portray that in the book.”

“We live today in a very polarized society and I used the battle of Blair Mountain to illustrate the dangers of living in a polarized society that we are seeing today. …It’s not something that we cannot change. I think we are capable of changing it at any time, but the politization of absolutely everything — putting people on one side or another…. We need to rise above that stuff.”

I was quickly made aware of the fact that there were two kinds of parents buying textbooks at this event. Both types were home-schooling their children, moved by their own disillusion with state public schools. The first kind of parent … END_OF_DOCUMENT_TOKEN_TO_BE_REPLACED

END_OF_DOCUMENT_TOKEN_TO_BE_REPLACED 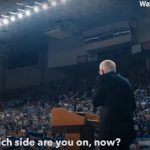 END_OF_DOCUMENT_TOKEN_TO_BE_REPLACED

The Revolution Will Not Be Shared I In this age of Trumpish tyrants, too many of us live and work in places where someone else — boss or client — is neither partner nor comrade, but our “king.” Where we’re … END_OF_DOCUMENT_TOKEN_TO_BE_REPLACED

I just received a message from a longtime Berlin pal, nonfiction filmmaker Rick Minnich, who always seems to be working on something cool and interesting. Rick has lost a friend of his own in March 2020, a 100-year-old fellow in … END_OF_DOCUMENT_TOKEN_TO_BE_REPLACED

I’m currently reading Christopher Clark’s book with the whopping title: Time and Power: Visions of History in German Politics from the Thirty Years’ War to the Third Reich. In it, Clark discusses how the Nazis “changed history” first by changing … END_OF_DOCUMENT_TOKEN_TO_BE_REPLACED

What people might want to remember today is that the US Justice Department has convicted the sitting president’s closest associates — including his attorney and his former election campaign manager — as criminals. They are sitting in prison for financial … END_OF_DOCUMENT_TOKEN_TO_BE_REPLACED

Saturday, Oct. 26, 2019 — I was talking to a dear, old friend of mine some time ago. She was thinking-out-loud about her current work — for a US food processing giant — and comparing it to the work she … END_OF_DOCUMENT_TOKEN_TO_BE_REPLACED