For more than 20 years before moving to Berlin, I was a freelance writer and publisher in my home state of West Virginia. As I pitched and sold stories to US magazines, I published West Virginia: A History for Beginners by the state’s most accomplished historian, John Alexander Williams.

I could write several columns on the different ways that John Alexander Williams has changed the study of Appalachian history and the social sciences. He is thanked by countless writers of wonderful, insightful work in the field. Beginning in 1998, I had the honor and pleasure of promoting his curriculum to teachers in his home state, who were then engaged in the difficult process of selecting new social studies textbooks for secondary schools. 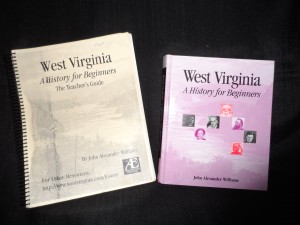 My publishing house, Appalachian Editions, borrowed and invested about $50,000 to print and promote West Virginia: A History for Beginners and its companion materials to state schools. To make a long story short, we were not successful, losing out to a competitor’s text that had been in use for most of the previous 20 years.

“You didn’t bribe enough school officials,” someone told us.

We recovered by repackaging the books for bookstores and tourist centers, but I was permanently disillusioned by the schools system. I probably knew the risks — or should have. John Alexander Williams began stirring up controversy in academia with his earliest work, a book written from his 1967 Ph.D. dissertation at Yale: “Davis and Elkins of West Virginia: Businessmen in Politics.” Today, the book is a classic: West Virginia and the Captains of Industry, first published in 1975 and still in print.

In these early works — and unlike anyone else, at the time — John Alexander Williams examined the remarkable lives of the earliest millionaire “coal barons” in West Virginia, men who also wielded substantial political clout, nationally. One, Henry G. Davis, became a powerful US senator and was the Democratic Party’s nominee for US vice president in 1904. Davis’s brother was a U.S. Congressman and his son-in-law, Stephen B. Elkins, was also his business partner, helping to build the Davis Coal & Coke Company, one of the biggest mining companies in the world in their time.

Elkins — who had served as secretary of war under US President Benjamin Harrison — was elected to three terms as a US senator from West Virginia. During that time, among other things, he chaired the Committee on the Geological Survey and was a member of the Committee on Interstate Commerce. Phenomenal political and economic power for one family.

John Williams’ ground-breaking work explored the ways in which these men — as coal executives and public figures — shaped the resource-based economy of the state, with implications for the modern disparities we see there today. John did this at a time when narratives of state and local history were still shaped by more traditional works, dating back to the Colonial Period, designed as promotional literature to attract settlers and investors to come live and work there. John Alexander Williams loved West Virginia, as he still does. But his service to the state was as an historian whose narratives contribute to our deeper understanding of our nation and state and the people who shaped it — not as a promoter or “cheerleader.”

His work was not appreciated by some 20th-century “movers and shakers,” the inheritors of coal wealth and its ancillary businesses in West Virginia. I experienced this first-hand, as I carried West Virginia: A History for Beginners around to potential publishing partners. At the same time, John was chosen to be the principal historian for an ambitious video project — West Virginia: A Film History, produced by Mark Samels, now the executive producer of the program American Experience, at WGBH in Boston.

By this time, John Williams’ practice was commonplace. Few credible historians of that time and since want their writing to be superficial, to serve some “official story” that only includes “good things” about the state. Since the 1970s, at least, the goal is to give readers (students) a richer and more substantive understanding of their past. John Alexander Williams has done this with his work, and done it well.

In making West Virginia: A Film History, however, Williams and Samels were hugely challenged by some of the project’s powerful state donors, some of whom had objected to Williams’ work since he began publishing it. I was told this conflict was a giant headache for the producers and for the staff and board of the project’s principal sponsor, the West Virginia Humanities Council. I heard several accounts of production meetings that were extremely contentious — painful for all involved.

As his editor and publisher, of course, my sympathies lay with John Alexander Williams and his no-nonsense approach to the state’s historical narrative, warts and all. I also deeply admired his writing as something akin to my own, as a working journalist.

I began as a nonfiction writer in the state around 1984, when I wrote and produced news spots for West Virginia Public Radio. I continued the work until I left the state in 2008. Partly as a reporter for The Associated Press and the Charleston Daily Mail, or as a stringer for Time magazine, I had chased down some of the best “spot stories” West Virginia had to offer, including tales of right-wing extremists (neo-Nazis), union strikes, and high-profile investigations of political corruption, including the federal prosecutions of a Charleston mayor and a state governor.

During my time there, I also worked with a former political boss of Logan County, and helped him record his memoir — including details of remarkable corruption, yes, but also his sense that he had been “doing good” for his own community, in Logan County, where my novel “Carla Rising” is set. (That book is Just Good Politics: The Life of Raymond Chafin, Appalachian Boss, published by the University of Pittsburgh in 1994.)

As we were preparing to publish Raymond Chafin’s book, he told me that the work had prompted questions from his powerful coal-industry friends. He told me they were a little nervous, and I thought again of John Williams: I was amazed historical research and writing about the state’s deep past would continue to cause such intense reaction in the 1990s, two decades after John penned West Virginia and the Captains of Industry.

I was gratified to read in 2015 that John Alexander Williams was welcomed back to speak in Charleston, the state capital, as a guest of the West Virginia Humanities Council. It was good to see that he could finally be brought “home,” so to speak, having been something of an exile — writing and teaching in North Carolina and Washington, DC — for most of his professional life.

From my point of view, John was able to return, in part, because many of his adversaries from “old days” had mellowed or passed.

The penalty for such study included a $10 fine per infringement.

Remarkable to think that teachers and students — those reading the “offending” research — could be charged with the crime of reading work by the state’s most accomplished historian.

As I watch current events from my new home in Berlin, I wonder how close West Virginia’s lawmakers will come to banning West Virginia: A History for Beginners, very fine writing that I’ve edited and published myself, not to mention John Alexander Williams’s other books, published by the West Virginia University Press and WW Norton.

As one of the state’s founders once wrote: “I drop the pen.”